Scuba In the News

Our Review of the Intova SS-1000 Waterproof Camera

I have been playing around with this scuba toy for the last month, the Intova SS-1000 Waterproof camera. This is a simple point and shoot camera that is waterproof down to 50 feet.  Its native resolution is 1.3 MP (1280x960) and goes up to 5MP (2560x1920) interpolated. Like most digital cameras today it has a video mode, but to date I have been unimpressed with any still camera’s video. The focal range is .5m to infinity. There is enough built in memory with 16MB to get you started on a few pictures before you will naturally want to upgrade by adding an external SD member card up to 2GBs in size. The package comes with a short PC interface cable to download the photos and  two AAA batteries so you can get right to using your impulse buy.

The SS-1000 Freed from its Packaging

I had been looking for one of these cameras for quite a while. I am surprised that big box retailers aren’t stocking these. I had to find mine at a scuba trade show at a dive shop’s booth. They had 5 of them on display and I snapped mine up for $50 with sales tax included.  I want to say my expectations were reasonable considering the price. After blasting my way into the sealed packaging it was pretty straight forward to setup. Everything was ready to go for the most part. It does take a little time to go through the menus but if you are going to just shoot some quick pictures your first go of it can be within a couple of minutes. I am not a big fan of the navigation menus.

There are four buttons on the back of the camera that does all of the menu functions including powering on. These buttons can be accessed both with the back open and with the camera seal to underwater use with a D pad through the case. On the top of the camera where you would expect it is the shutter button.

The size of the camera is convenient and is around the size of a deck of playing cards. It can easily fit into a shirt or pants pocket. There is a simple lanyard attached which I used to clip off to my BC. So far this camera has joined me on three dives with the deepest being 1 foot beyond its 50’ waterproof rating.

Showing off with USB Cable Attached

The clear case provides you good visibility to see if you have sprung a leak and flooded the camera. So far it has been water tight.

Now on to the important part, the pictures. That is why you buy a camera right? How I wanted to use this camera is to take quick snap shots underwater to share with the non-diver surface dwellers who frequently ask “What do you see down there?” I figured the semi-disposable camera would foot the bill. My first photos where on the surface.

All photos are taken through the underwater camera housing even above water. I took several pictures and I could not manage to get a sharp picture. My reference camera is a simple iPhone 3G camera which is similar resolution and the camera I use for 90% of my impromptu pictures. The shutter button on the SS-100 is very stiff and the effort required to take the photo seemed to cause the camera to move as the picture is being digitally capture. I wondered if the camera worked better in its underwater element. So next was onto the sink test.

I filled my kitchen sink with water and placed a few underwater artifacts in it.  The photos were not any better, but I had violated the minimum focal length so then onto the hot tub (No not those type of photos silly people).  In the hot tub with my repositioned artifacts the photos turned out better. They were enough better to prompt a hunt by another MUD Club diver to add this camera to his shopping list.

My first official dive with the camera was a river dive with a disappointing 6” of visibility.

Six inches was effectively dirty pea soup and even the best camera was not going to shine.

The next dive, which was to 51 feet, was on a wreck in Lake Michigan and I honestly didn’t want to mess with anything other than enjoying the view so the camera stayed in my BC pocked the whole time. The following week I let my kids walk around with the camera at an indoor water park and perform adolescent gadget abuse on it. Oddly enough they never actually snapped a picture with it. The only shots were me making sure the batteries were in it and working. The last test dive was another wreck dive. This time I was determined to actually try out the camera. I took a couple of surface shots.

One turned out nice enough to become Jim’s newest FaceBook profile pictures. I forgot about the camera until I got to the bottom at 39 feet. No problem I thought, except no matter how hard I pressed the power button I couldn’t get the camera to power on.

I was tempted to take off my gloves, but in 41 degree F water that was not an attractive idea. On my safety stop I decided to give it another try and to my relief I was able to get it to power up. I took several pictures of Jim and passed the camera to him. This was a good move since on that day he turned out to be the better photographer.

Positives on the camera is the price, the size and I like the transparent case. On the negative is that it eats batteries. In fact I have had to replace batteries between each use. Also the buttons were too hard to push at depth and this leads to some blurry pictures when you can depress the shutter button. I would like to see a 2 second self timer so I could press the button and then steady the camera for the shot. There is a 10 second self time but that is too long for another other than trying to take your own picture.

Overall I think the camera is worth the $50 I paid for it. Considering how hard it was to use as the depth increased I wouldn’t call it a scuba diver’s camera, but for near surface shots it works well. I also see it as a good camera that can handle water splashes on the boat ride and with it being positively buoyant if you drop it in the water you can just pick it up. I would easily recommend it over any disposable underwater film camera you could buy at a resort for $20.

I am now looking for a $100 underwater camera that would work at deeper depths.

This gallery has photos of the camera taken with an Apple iPhone 3G and all other photos are taken with the Intova Model SS-1000 underwater digital camera. Most of the photos taken by Darrin and the good ones are taken by Jim. 🙂

The SS-1000 Freed from its Packaging

Showing off with USB Cable Attached

Darrin and Jim will be attending the Our World Underwater show in Chicago on Saturday February 20th, 2010. Are you going to be there? We would love to know. We will be previewing some of what there is to enjoy there on this Thursday's Scuba Obsessed Netcast.  Many of our MUD Club friends will be there as well. We can't wait!

This was Jim's first ice dive. The dive was completed at Singer Lake in Baroda, MI on January 9th, 2010. Don McAlhany was tending the line and Darrin Jillson was playing safety dive while waiting for his turn.

Listen to the podcast where Jim, Darrin and Don talk about this dive here.

You can see more photos from this dive here.

Video was recorded by Josh Kliemann.

Notes to come (really I need some sleep. I will get these up tomorrow. Come on... take a chance and listen... really good stuff here) 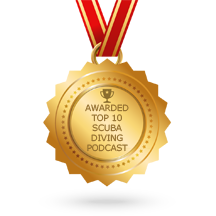